Monster Truck show are very popular these days, especially in America. However, have you ever wondered what are the most amazing monster trucks? Which vehicles of this type are the most appreciated? If so, then we will show you in this article the best of them.

There is no doubt that this is one of the most popular and highly appreciated monster trucks of all time. Grave Digger was originally built in 1981 by Dennis Anderson, and over time it has had plenty of improvements. Anderson was one of the early pioneers in this type of competitions in the United States, and he actually built not more and not less than 32 trucks during his career. All the shows that have had Grave Digger were absolutely spectacular and they remained in history.

This monster truck started out as a stock, owned and also modified by Michael Valters. The first modification was very interesting as it was a homemade one, since such kits were not available at the time. The modification was a 12” lift kit which has been quite successful. Valters later added an Alpine stereo system, 2 sunroofs, and a Ford 460 engine. The modifications didn’t stop here because he also added Rockwell 5-ton toploaders, 66” terra tires, and a 1988 Ford F series front end. However, all sort of modifications have been made over time, and Michael Valter participated to several shows in America, Columbia, Birmingham, Toronto, Worcester, and more., and many times he won these competitions.

Bigfoot looks very aggressive. It is known as the original Monster Truck, and it was built in 1975. Bigfoot is owned and operated as well by Bob Chandler. This is the first truck in its category to be used in promotions for driving over several junk cars. Different versions of Bigfoot have been seen over the years. The company has established very strong relationships with Microsoft, Summit Racing, Firestone, and ViCor as well.

Zombie is another popular monster truck. It is quite recent, as it made its debut in 2013. It is very popular on the Monster Jam circuit in the United States. The driver is Sean Duhon, and the vehicle itself features a 540 CI Merlin engine rated at 1,500 HP and a Coan 2-speed transmission. The truck uses 66” Terra tires and its design is absolutely spectacular. An amazing thing about Zombie is that it actually has its own Hot Wheels car by the same design and name as plenty of the other famous Monster Trucks on the nowadays professional circuit.

Plenty of Monster Truck events are being held these days all over the world, and if you would see the massive vehicles we have presented in this article you will certainly understand why they are so popular. Experiencing such a show is without a doubt something unforgettable that any of us should try at least once in a lifetime. Don’t forget that these shows don’t have an age limit which means that they are excellent for the entire family. 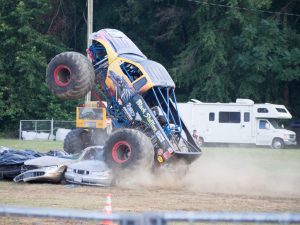